This system allows NASA’s Wallops Flight Facility to record the full 72 hours of the launch, starting up to two days before and ending hours after the launch. Cameras, control room and Drastic DDRs are located off island a safe distance from the launch site. The system is capable of recording 44 HD streams, frame accurately synchronised, in order to capture every detail of the event.

Each camera is connected through an Evertz IRIG inserter to a Drastic DDR device which are capable of synchronized recording and playback. The Drastic DDRs can record the signals in a variety of formats including Uncompressed, DVCPro, AVCi-100, MPEG-2 and JPEG-2000.  The files are stored as standard MXF, MOV, AVI, YUV or other standard types. The IRIG time code is embedded into the file as readable metadata.  For monitoring and control all the DDRs are are connected via Drastic’s SyncControl Pro software in order to frame accurately synchronize the start and stop of video capture or playback. 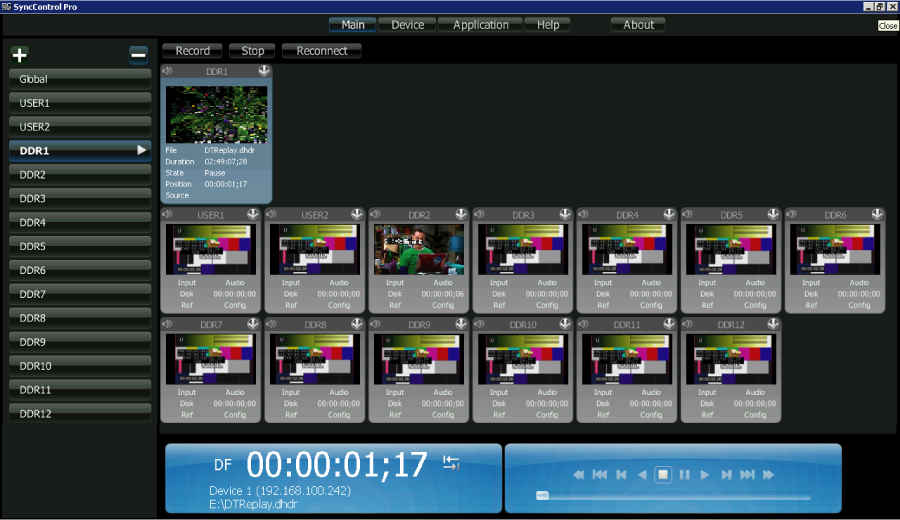 SyncControl Pro provides configuration, video and audio meter monitoring, record start/stop, and real time play while record control of all the Drastic DDR systems.  It connects via standard gigabit ethernet lines, and controls both players and recorders, allowing for quick changes of sync grouping and recorder loading via drag and drop or keyboard controls.

The workflow starts with setup, making sure all previous video is cleared from the DDRs. The record countdown may begin up to 36 hours in advance of a launch event. The required file type and input selections are confirmed, and then the DDRs are placed into a simultaneous record. Playback DDRs are assigned to the recorders to allow selected video to be reviewed without interrupting the capture process. Once the event has ended the record DDRs are stopped, and the video associated with the event may be immediately reviewed, moved to a SAN, or archived to offline tape storage.

At any time during and after recording, up to 10 channels can be played back, in sync and at any speed, from any time during the launch event. IRIG time code is embedded in all of the recording channels, and the material is also available during record for their Adobe Premiere editors by using Drastic’s Edit-While-Record MediaReactor Workstation plug in. All material is moved off to a 144TBs EzHDSAN Shared Storage and the system is ready to record again within 24 hours. Two LTO5 LTFS 24 tape Robotic Libraries are used for archiving from the SAN.

Drastic in the UK

Pixelution have supplied Drastic Technologies DDR systems in the UK for the last 10 years. We have an extremely close relationship with Drastic and have worked with them to develop product features over the years. Our customers for these systems include Snell & Willcox, Ericsson Television, BBC, ITV and many more. The Drastic DDR solution is based around standard PC hardware and easily integrates with existing networks and SAN’s. It is a high-end solution for uncompressed capture of single or multiple SD or HD video streams. The un-compromised quality of the recordings make them ideal for digital ingest, mastering or technical comparison work (compression testing etc.). The systems are designed to run 24/7 and provide a true workhorse solution for those requiring continuous video playback or recording. If you have a requirement for this type of DDR then please contact us to discuss the options and receive a tailored quotation.