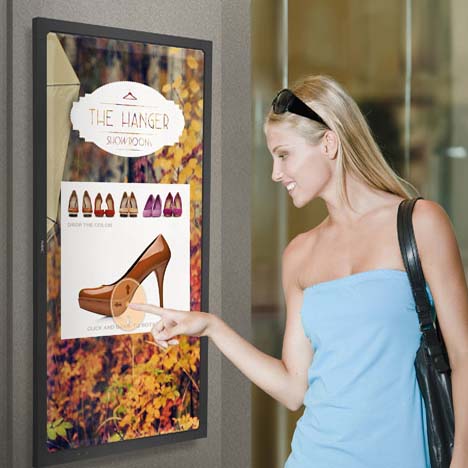 Since the turn of the 21st century touch screen monitors have become come place in day to day life – on our phones and tablets, in shopping centres, car parks, transport terminals and classrooms. In today’s world touch screens are second nature and when information is presented on a screen within reaching distance many people instinctively reach out to interact with the content displayed.

There are many different touch screen technologies available. Each has its own strengths and weaknesses and it is important to choose the right touch sensor for the intended application.  For example a touch screen for use as a reference map in a public space would normally only require very basic input to navigate around the content but needs to be rugged and hardwearing for continued day to day use. By contrast a touch screen which is being used as a replacement for a traditional whiteboard in a boardroom or classroom environment needs to be fast and responsive in order to capture writing or drawing input accurately.

With that in mind here is a brief overview of the most common touch sensors available on large format public display monitors that would typically be used for these types of application.

The DST sensor is installed behind the glass and offers a fast, accurate and repeatable single touch input. The sensor detects piezoelectric variations that occur due to mechanical vibrations caused by a touch event. It will still detect new touch points with static objects or other touches on the screen which makes it an ideal solution for tabletop applications where for example someone may place a drinking glass on the surface. Due to the physical nature of the sensor touch inputs are recognised from bare hands, gloves or stylus, and sensitivity is not affected by dirt, grease or scratches. DST sensors are not recommended where drag & drop in mission critical applications is a requirement and are best suited for simple, bespoke interfaces and custom software.

PCT sensors use a matrix of conductive material layered on the glass. An electric current is then applied to create a uniform electrostatic field across the screen. When the screen is touched by a conductive object, like a finger, the field is distorted and the point of impact accurately calculated. As the sensor is built into the glass it is ideal for vandal-proof applications offering resistance to scratching and gouging, and cannot be interfered with by the end user making it ideal for use in public spaces. However the accuracy is directly proportional to the size of the matrix so on larger screens the grid spacing can be further apart making it a little less accurate. It is best suited for simple interactions with custom interfaces rather than precise point and click operations.

Optical touch screens simply use cameras mounted under the bezel of the monitor, usually located in the corners. When an object touches the screen the cameras cross-reference the object and determine its position on the screen. This type of sensor is able to track inputs very quickly and accurately. By adding more cameras to the sensor multiple inputs can be tracked. Optical sensors are an ideal solution for whiteboard replacement touch screens. However as the sensor is installed on top of the glass (but under the bezel) it can be tampered with and as such is not the best solution for use in public spaces.

The InfraRed touch sensor is really an extension of the optical system. By using an array of infrared sensors along the edges of the screen they are able to detect multiple simultaneous inputs – currently up to 30. The sensor is once again installed under the bezel and like the OST sensor offers superb image quality as there is nothing in front of the screen. However both sensors can suffer from interference from dust and dirt build up on the sensor. The position of which is critical and care should be taken to order the screen in the appropriate orientation as the sensors are mounted differently when used in portrait or landscape modes – primarily to avoid the built up of dust.

Whatever you application there is a touch screen technology available that can enhance the user experience. From small desktop sized screens up to massive interactive video walls, whatever the application, we have a touch screen solution available.