To understand what makes a LCD display sunlight readable you must first understand how a typical LCD monitor works.

LCD displays are classed as transmissive displays, meaning they do not produce their own light source but rely on another light source to make them visible.

Flat panel LCD displays are built from multiple layers that work together to produce the final on-screen image. At the back of the panel the first layer is the backlight. This is the primary light source for the screen which ultimately makes the image visible. Previously a diffused panel of cold cathode tubes (fluorescent lights) was used for the light source but modern LED technology is more energy efficient and long lasting.

Most modern LCD monitors now use LED’s for their backlight, either around the edge of the screen or as a complete matrix which covers the entire screen area. A full backlight matrix provides many advantages over the edge-lit system. It usually results in a brighter and more even image but it also allows for the controlled local dimming of areas of the screen to help increase contrast and improve black levels. A full matrix backlight costs more than the edge-lit version and also increases the overall size and power consumption of the unit with the trade-off being overall better image quality.

Some screens take advantage of a transflective layer. This layer reflects incoming light back out of the panel increasing the light output of the screen in bright conditions. This technology is most commonly found in smaller screens like automotive screens and portable devices as it is a great way to reduce energy consumption.

However the light behind the screen is produced the next layer in the panel is a polarising filter which aligns the light waves into a single direction. The polarised light now enters the actual Liquid Crystal layer. This layer determines whether the light passes through or not. The panel is made up of individual cells, three cells side-by-side represents a single screen pixel. So a Full HD resolution screen, 1920 x 1080 pixels, would require 6,220,800 cells to produce a full colour image.

The light makes it through each cell and is then passed onto a colour filter layer.

Each of the three cells in a pixel represents a primary colour – Red, Green and Blue. The Colour Filter layer consists of rows made from these three colours aligned to the cells below. As all other colours in the visible light spectrum are made from these three primary colours by mixing the intensity of each cell the LCD can produce any colour required. So if you wanted to produce the colour Red on screen the Blue and Green cells would turn on, blocking the passage of light and leaving only the Red cell to light up. As the cells are so tightly packed if all three are turned off to allow the light to pass through the human eye perceives the combination of the primary colours as white light. 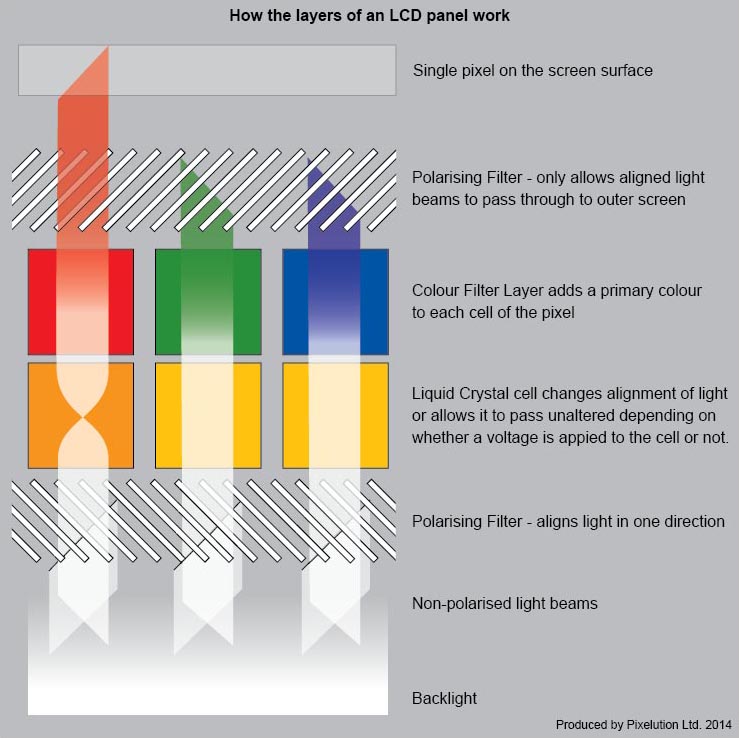 So now we know how the on-screen image is produced the question remains what makes some screens daylight visible and others not?

Anyone who has taken a laptop outside on a sunny day will know that standard LCD screens do not hold up well in very bright conditions. The main reason for this is that the backlight in the screen is having to compete with the incoming sunlight and inevitably the sun is brighter.

Daylight visible screens have extra bright backlights to help push the image through in high ambient light conditions. The standard measurement of brightness for LCD monitors is cd/m2 (candela per square metre) or Nit (believed to be derived from the Latin word nitere, to shine). 1 nit = 1 cd/m2 so the terminology is interchangeable. Candela is the standard unit of luminance and for screens it is measured over a standard area of 1 metre squared.

LCD screens for desktop monitors typically rate at anywhere between 250cd/m2 and 450cd/m2. Large format Public Display monitors typically range from 350cd/m22 up to 700cd/m2. Some manufacturers claim 700cd/m2 to be a high brightness screen, which technically it is, however it cannot really be classed as daylight viewable. Generally anything above 1000cd/m2 can be considered a daylight screen but as with most technology bigger is better. Screens rated at 2,500cd/m2 and above produce excellent results in very bright conditions. Currently the brightest LCD displays available are rated at 5,000cd/m2.

However having a bright backlight on its own does not make for a good looking LCD screen. Just turning up the light source behind the screen can lead to washed out colours, poor contrast and a generally disappointing image. To produce great looking and vivid images your screen needs high levels of contrast and accurate colour reproduction. A full matrix LED backlight allows for high brightness but combined with local dimming it can create high contrast images with deep black levels. By calibrating the colour of the screen you can help produce more natural looking colours. Many LCD screens are prone to a bluish tint leading to colours looking cool. Ensuring your screen is properly calibrated helps maintain a true colour reproduction leaving skin tones looking natural and whites as pure white.

The other issue affecting LCD panels that are used in sunlight is their susceptibility to damage from the heat of the sun. When the Liquid Crystal layer is heated the crystal warps resulting in dark patches forming on the screen. If removed from the heat these patches will usually cool and return to normal but repeated exposure will eventually lead to permanent damage. Professional high brightness displays use LCD panels that are rated for operation under extreme temperatures and do not warp or blacken.

A good quality high brightness screen will look great in all conditions. The added brightness makes your content shine whether it is installed inside or out. As with most visual things you have to see the difference these screens produce for yourself. Photos of these screens just do not capture the true quality of the image when compared to standard screens.

For information on the Sunlight Readable LCD Screens that we offer, please contact us at – https://www.pixelution.co.uk/contact-us/